Pasco, WA (2-12-15) — Police in Washington state shot a man to death who threw rocks at them, officials said on Wednesday, as a video published online appearing to show the incident drew criticism of the officers’ actions.

The police shooting in Pasco, Washington comes amid heightened tension across the country in the wake of high-profile police killings of unarmed minorities, particularly in Ferguson, Missouri and New York City.

The officers attempted to use a stun gun to incapacitate Zambrano-Montes after he would not obey commands to surrender, before they opened fire and killed him, the statement said.

A video of the incident posted on YouTube and cited by local media showed the man running away from the three officers before he was killed.

In the 22-second video, the man moves across the street from the pursuing policemen. He turns to face them briefly, lifting his right arm as if to throw another object, when they open fire, according to the video.

Pasco Police Captain Ken Roske said when reached by Reuters on Wednesday night that the department had reviewed videos of the incident, but could not confirm their authenticity.

“They certainly look like the right intersections,” he said, adding that the Tri-City Special Investigation Unit would conduct a full probe into the shooting.

The Seattle Times, which linked to the video on its website, reported that a few dozen people gathered outside Pasco City Hall in protest of the shooting on Wednesday.

“Fleeing from police and not following an officer’s command should not be sufficient for a person to get shot,” ACLU of Washington Director Kathleen Taylor said in a statement, according to the Seattle Times.

Two officers were hit by rocks in the incident, police said. They were treated at the scene, and the extent of their injuries was not provided.

The officers were placed on administrative leave, as per department policy, the statement said. 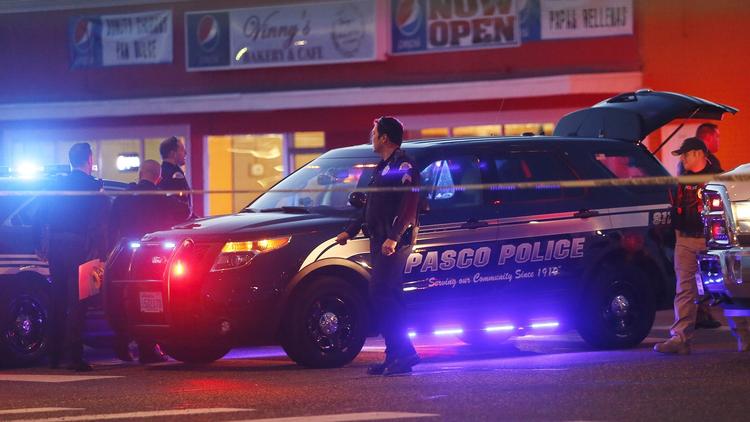 Police investigate the scene after officers shot a man to death in Pasco, Wash. 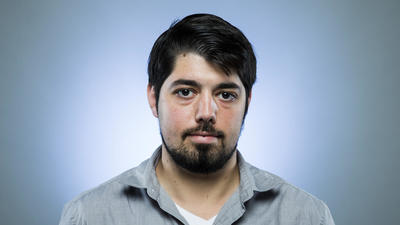 A Washington state man shot and killed by police this month in an incident captured on video was struck at least five times by bullets, investigators said Wednesday.

The deadly clash Feb. 10 in a Pasco, Wash., parking lot took place after police confronted Antonio Zambrano-Montes, 35, following reports that he was hurling rocks at vehicles. Police fired 17 rounds at Zambrano-Montes, according to Sgt. Ken Lattin, public information officer for the Tri-Cities Special Investigations Unit, which is reviewing the shooting.

On Wednesday, Lattin said police had determined that Zambrano-Montes was not shot in the back. A final analysis by the state medical examiner’s office may not be completed until March, he said.

Lattin said further questions would be fielded by city officials and the Franklin County prosecutor or coroner.

Investigators’ initial findings were released a day after the attorney who represented the family of Michael Brown, Benjamin Crump, announced he would be representing Zambrano-Montes’ parents. The police killing of Brown in Ferguson, Mo., last year spurred intense protests and questions about police use of force.

In the Washington shooting, authorities said Pasco police sent to the parking lot ordered Zambrano-Montes to stop throwing rocks several times, and tried to subdue him with a stun gun after he struck two officers with rocks.

In a statement released shortly after the shooting, police said they shot Zambrano-Montes several times and he was pronounced dead at the scene.

A video posted to YouTube, however, appears to show Zambrano-Montes exiting the parking lot, and then running away down a side street with the officers in pursuit.

Near the end of the clip, Zambrano-Montes briefly turns toward the officers. He then falls to the ground as the officers raise their weapons. It was unclear whether all three officers fired at him.

The shooting is under investigation by several agencies. While the Tri-Cities Special Investigation Unit has been handling media requests and is reviewing the circumstances of the shooting, Franklin County Coroner Dan Blasdell has also called for a special coroner’s office inquest into the deadly clash.

While the coroner’s inquest cannot result in the filing of criminal charges, the findings of the panel can be reviewed by local prosecutors, Blasdell previously told the Los Angeles Times.

Pasco, about 200 miles southeast of Seattle near the Oregon border, is part of the Tri-Cities area that also includes Kennewick and Richland.

Crump’s entry into the case is the latest in a series of legal maneuvers that have followed the shooting.

Zambrano-Montes’ widow and daughters filed a $25-million wrongful-death claim against the police department this month, according to the Seattle Times, but it remains unclear if they had legal standing to do so.

Adner Marcelin, speaking on behalf of Crump, told the Los Angeles Times that the pair may not have been legally married. Zambrano-Montes’ parents, who both reside in Mexico, have asked Crump’s office to conduct a separate investigation of the shooting, Marcelin said.

Marcelin declined to comment on the pending claim by the woman identified as Zambrano-Montes’ widow, who is being represented by a seperate law firm.

Zambrano-Montes had been arrested last year on suspicion of assaulting a city police officer, and a warrant for his arrest was issued in early February after he failed to appear in court. He was last released from police custody the day before the shooting, court records show.

One of the Pasco officers involved in the shooting, Ryan Flanagan, had been named in an excessive-force lawsuit filed by Pasco resident Maria Davila-Marquez in 2009, according to court records. Davila-Marquez accused Flanagan of restraining her and pressing her against the hood of a police cruiser, which was “hot enough to burn human skin,” according to the lawsuit.

The city eventually reached a $100,000 settlement with the woman, according to a report in the Tri-City Herald. The lawsuit said the department did not discipline Flanagan for the incident, a police spokesman previously told The Times.